"The FlySwat MultiTrack™" - a further development of the established "FlySwat" - is now the largest and most flexible certified mobile athletics facility in the world!
It can be set up in the configurations of pole vault, long jump / triple jump and can also be adapted for shot put and high jump.The maximum total length is 83 meters with a weight of up to 25 tons (including 10 m3 of sand).

At the opening of the new facility on September 5, 2020 as part of the 16th Int. Golden Roof Challenge in Innsbruck - also "Home of Golden Fly Series" - Nastassia Myronchuk-Ivanova / BLR achieved an annual world leading mark for the long jump with 6.94 m!
At the same event, Greek Stylianos Malakopoulos set a Paralympic long jump world record with 6.93 m (T 62)!

The facility enables professional competitions to be held close to the audience at any location outside the stadiums.
The entire system can be transported in a standard truck and can be set up for competitions within 7 hours and dismantled in 3 hours!
Rental inquiries: office@goldenflysports.com

The system is set up with millimeter precision using a levelling device and complies with the latest World Athletics regulations in all respects. This makes the system suitable for records and world rankings!
Limits for large international competitions and even world records can be achieved on it!

Thank you Renaud – you did something really great! 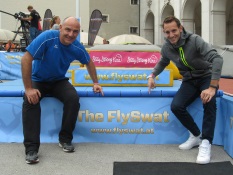 "The FlySwat™" and "The FlySwat MultiTrack™" are registered trademarks and intellectual property of Golden Fly Sports GmbH. Unauthorized imitation will be prosecuted.