A revolution for long and triple jump! 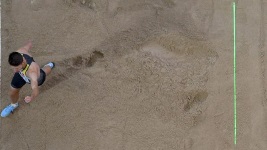 'PrimeLine’ is the perfect solution for your jump event – the laser line which indicates the mark do beat, offers perfect visualisation for spectators athletes and media, it also works well with TV Graphics.
The laser line is for visual orientation and is not a distance measuring system!

The ‘PrimeLine’ is an idea of Golden Fly Series CEO and Golden Roof Challenge meeting director Dipl. Trainer Armin Margreiter. A radar, coupled with a laser line, displays on the sand, indicating the distance to be beaten in the long or triple jump. Working in partnership with the innovative laser specialist MediaLas GmbH from Balingen Germany, already well known for the exclusive laser displays for ski-jumping worldwide, Margreiter used his experience as Austrian National Coach to develop this unique product.

The "PrimeLine power" was developed for the long and triple jump competitions for the European Athletics Championships 2018 in Berlin, in cooperation with Golden Fly Sports GmbH and MediaLas GmbH - especially for the qualification competitions.

It has a significantly increased, full daylight capability laser with no drive system and can be manually set to the desired width. The system also has all the necessary security measures and can be perfectly adapted to TV needs by flexibly setting the brightness and the necessary laser interruption time during body contact! The entire system can optionally be integrated into an LED wide ruler or an analogue wide ruler. It is a revolution for long and triple jump!

The "PrimeLine power" can also be offered with an analog, neutral width ruler in the desired coverage areas. The width ruler can also be provided with sponsor logos or wish branding according to the wishes of the client. Here in action at the Austrian Championships 2019.

The "PrimeLine power drive" was also developed for the long and triple jump competitions of the European Athletics Championships 2018 in Berlin. It too, has a significantly increased full daylight capability, as well as automatic data transmission of the guidance distance (ODS or tablet input), with fully automatic control by means of a drive system. The entire system can optionally be integrated into an LED wide ruler or an analogue wide ruler. For LED wide rulers, a special support structure has been developed for the LED elements with flying sand protection, analogue, to the laser system tuned wide rulers can be supplied by Golden Fly Sports - or produced in any desired branding. The system has all the necessary security systems and can be tuned by flexible adjustment of the brightness and the necessary laser interruption time during the body touch wich meets perfectly with TV needs!

It was successfully used in front of up to 60,500 spectators in the Olympic Stadium Berlin and visible worldwide via the TV broadcasts to 42 different TV stations!

What European Champions of Berlin 2018 say...