What our athletes say

“I am very happy to have the opportunity to give my opinion about your competition! I felt very excited and motivated in the Golden Fly Series on “The FlySwat” in Cologne. I could show my jumps for the crowd and it was great to feel the good atmosphere, especially with the people very close to the track and a good organization. I hope you can continue with this kind of meeting and I would like to come back again!“

"Armin Margreiter and his team do an excellent job for the promotion of athletics – it’s a great concept, especially the Golden Roof Challenge in Innsbruck. As long as all the IAAF requirements are met – which is the case with the Golden Fly Series – the events are fully-fledged athletic competitions and enrich the IAAF competition calendar. We need such events to showcase the appeal of athletics in a modern, audience-grabbing light!"

"The Golden Fly Series in Rio was by far one of the best events I have ever competed in. The competition was nothing short of amazing with the best athletes from around the world, and one of the coolest venues I have ever seen. The people of Rio were so wonderful, and the energy at the meet was so intense! The crowd didn't matter if you made the bar or not- they cheered anyway!
The Golden Fly Series event was the perfect opportunity to experience Rio before the Olympic Games in August. It was an experience that I believe will give me an upper edge heading into the games."

"Exactly such concepts as the "Golden Fly Series" needs Athletics ... exciting competitions in a great setting combined with the most professional organization! For us, athletes, it´s always a highlight so close to the audience, because this guarantees the very special atmosphere of the Golden Fly Series. I am also happy to be here in 2015 and am already looking forward to exciting duels with top international athletes!"

“The Golden Fly Series offers a highly energetic atmosphere that combines sport and entertainment. The Golden Fly Series management team does an excellent job of organizing events that provide opportunity for athletes and a great show for all spectators who attend.”
Jeff Hartwig set at the Int. Golden Roof Challenge 2008 in Innsbruck/Austria a new world record at the age of 40 years (5.60 )!

“During the last year, I competed in several events of the Golden Fly Series. It is about big meets which provide a great experience for each competitor. For me personally, is always pleasure to compete with elite world class athletes in front of emotional and very warm audiences, in different cities every time and on the largest mobile track and field apparatus of the world - “The FlySwat”. Additionally, from an athlete's point of view, it is very important to have high standards in order to achieve big performances. You have done that! At this point, I want to thank the organizers and, of course, everybody who contributed to organizing those meets. I'm looking forward to be with you also next season and why not, at all the events of the Series. Good luck with your work and I wish all the best.”

"The Golden Fly Series was a very exiting experience for me and the atmosphere so close to thousands of enthusiastic fans was new and unique. It was a real pleasure to jump as the mobile apparatus of the series "The FlySwat" allows really big jumps as well!  So I`m glad that I was part of this great initiative bringing athletics directly to the people and look forward in further jumps in the next years!"

"I've been in Innsbruck, for the start of the Golden Fly Series. It was an excellent competition with lots of atmosphere and a unique interaction with the audience, which transmits pure energy and shivers to the athletes! It was a perfectly organised competition with an all star cast, which promotes top performances and guarantees excellent visibility!”

European Champions about the "PrimeLine"


“This new laser line system is surely a big upgrade for all jump events! After crossing the fixed qualification laser line, I knew, I want to be the last which surpass the “PrimeLine” in the final to take the gold medal – and I was successful! It would be great, if this development will become a standard for all big championships in future!“


“The first time in history audience and athletes get a clear picture of the leading distance to beat, independent from which position they look into the pit! The “PrimeLine” takes a new quality into the jumps, immediate information for audience and media as well as the necessary security measures for the athletes. I would look forward to attack her again in the future!“ 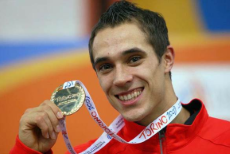 
„PrimeLine" is a fully automated laser system which was developed for the European Athletics Championships, Berlin 2018 by Golden Fly Sports in cooperation with laser specialist MediaLas. It was used for both the qualifying rounds and the finals of both the Long Jump and Triple Jump competitions. The system worked flawlessly and was highly engaging for the spectators and athletes! Working in close cooperation with the Laser-team, led by Golden Fly Sports CEO Armin Margreiter was highly professional, constructive and extremely a pleasant experience."

We are pleased to confirm, that your new laser system, the "PrimeLine", was used very successfully at the European Athletics Championships 2018 in Berlin for the visualisation of distances in the long and triple jump events. It worked flawlessly and reliably and represents a major improvement in the Jump competitions for the public, athletes and the media! The system is not a measuring device, but relies on the measurements supplied by a service provider. In this respect, the laser system can also correct any eventual discrepancies in the measurement by the respective systems. In fact it is comparable to a virtual display panel and is a modern form of visualisation of the required guidance distance.

What our partners say

“Two years ago, Munich was one of the first cities to welcome the largest mobile Athletics jump facility to host an international, world-class jump meeting. The "Fly Swat" makes it possible to stage Athletics competitions outside a stadium skillfully and close up to the people. At the Golden Fly Series, everything is always in accordance with the highest international competition standards. The combination of a high-profile European City within an international competition series is an important step for the successful future of track and field events. Once again in 2014 the Jump & Fly Munich will be part of the Golden Fly Series."

“The Austrian Athletics Federation (ÖLV) welcomes and fully supports the Golden Fly Series, launched by Tyrolean Armin Margreiter and his highly professional team in Innsbruck. This mobile Athletics Series, performed in city centres on the world’s largest mobile Athletics apparatus "The FlySwat ™" is a great initiative, which proves that even small Athletics destinations can give new impetus to the development and growth of our fascinating sport attracting wide media coverage. For his tireless and courageous efforts in the sense of modern athletics Golden Fly Series operations CEO Armin Margreiter in March this year received the title "Austrian Athletics Ambassador of the Year 2014" from our Federation.”